EHD2022: Around the kitchen table with Maggie’s

Valuing the health workforce and family carers through design of the built environment was the topic under discussion as part of a panel organised with Maggie’s that opened day two of European Healthcare Design 2022.

Established over 25 years ago, Maggie’s centres were set up to support people with cancer, and their families and friends, to help them navigate feelings of isolation and loss of control, hopelessness and helplessness, which can be associated with a cancer diagnosis.

Chief executive of Maggie’s Dame Laura Lee explained that the charity’s role in helping people with some of the practical challenges around cancer – including addressing financial worries and debt management; dealing with mental health challenges; learning stress management techniques; and receiving peer support – are “powerful for people coming along and realising that they’re not alone”.

She explained how she became a believer in the importance of the design of buildings when she first became an employee at Maggie’s. She noticed that the same patients who she had been seeing at the cancer centre for several years came over to her and opened up about their worries and concerns about treatment, and their social and family challenges. She realised “there was something about the building and environment” that helped people “navigate the challenges of cancer and work out a plan to help themselves”.

The patient and carer

Providing a very personal experience of the importance of Maggie’s in dealing with cancer, carer Charles Curwain explained how his husband, Martin, was diagnosed with follicular lymphoma in 2013 – a diagnosis that was delivered over the phone to them while at home, and without much warning. 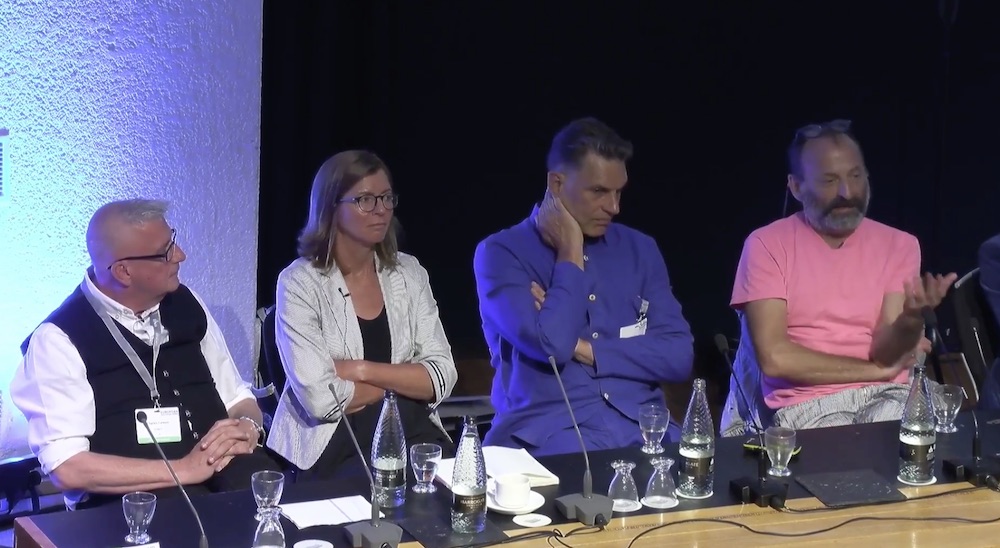 Charles described the sofa where they received the news as “a symbol of safety and comfort”. He elaborated: “Hospitals are not our favourite places, but on that day, we would have loved to have been in an office, in a hospital, with a health professional explaining things and being kind. We were totally and utterly alone with just the sofa to catch us.”

Six years later, Charles and Martin came across a Maggie’s centre, which had just opened at the Royal Marsden, after seeing a leaflet in the hospital’s outpatients department. “There was this incredible building,” said Charles, “so beautifully designed, with big windows looking out onto the beautiful but understated garden.”

He continued: “Patients all too often have to tolerate environments that are too hot, uncomfortable, and not fit for purpose. And the impact of this is profound. It’s exhausting and depressing. The hours spent standing in outpatient clinics because there are not enough chairs, and non-patients being ordered to give up their seats for patients because, again, we carers don’t matter. Martin and I became so ground down by all this and nothing apart from Maggie’s changed in those nine years.”

He added that their journey would have been transformed if Maggie’s had been around at the start of Martin’s diagnosis, and they had “a space to relax in, and feel special and cared for in those early days”.

Charles recalled, with a little embarrassment, that it had taken them 11 separate visits to IKEA before they finally purchased the sofa on which they received their devastating news in 2013. But this, he said, also proved how important our internal environments are to us as humans.

He concluded: “Having seen how a professional environment like Maggie’s can be designed to comfort and nurture those in incredibly stressful situations, it remains a mystery why a hospital environment cannot be similarly viewed – ensuring just a basic level of comfort that values people in difficult circumstances. I do not believe this has to cost fortunes yet it can speed and enhance people’s recovery, and help their general wellbeing, and for those working in those environments.”

The discussion moved on to two architects, both of whom had designed separate Maggie’s centres – Alex de Rijke, from dRMM, which created the Maggie’s Oldham centre, and Ab Rogers, winner of the recent Wolfson Economics Prize to design and plan the future hospital and architect of the Maggie’s at the Royal Marsden.

De Rijke explained how the Maggie’s centre Oldham became a chance to test a lot of assumptions, not least around the value of using timber over materials such as concrete and plastic. He wanted the centre to be an “antithesis of the hospital building”, which he describes as “full of toxins” – the vinyl flooring, the paints, the lack of daylight and overuse of fluorescent lighting, and the vending machines full of sugar.

“This isn’t a diatribe against hospitals or the medical profession, for whom I have a massive respect,” he said. “It’s just the idea that your architecture has devolved into a highly mechanistic expression of processes as opposed to experiences.”

He noted, too, the importance of the psychology of colour. The building adopted the tones of the natural materials used, with yellow predominantly used for the flooring. This had the added benefit of negating any adverse effects experienced by patients who had recently undergone radiotherapy or chemotherapy, and whose skin tone differences may have been exacerbated by the “wrong kind of light”.

Another key feature is the birch tree in the heart of the building, known as the ‘tree of life’. De Rijke recalled how the builders felt the hole where the tree was planted represented a “waste of space”, whereas to him, it was a “gain in space, as it brought everything into the building – the gaze down to the garden, up to the sky, and across to the tree”.

Ab Rogers echoed de Rijke in revealing his design at the Royal Marsden also aimed to “create an antidote to the hospital as a machine”.

There are two advantages, he argued, with the way Maggie’s procures the design of its buildings. The first, he explained, is speed – the Maggie’s approach is “a slow, methodical process, allowing you to concentrate on the design”. The second, he said, is the lack of bureaucracy, in contrast to the way governments have created red tape through “their fear of spending money”, and ended up creating this system “that consumes much more money in the long run”.

He said: “I think if we can concentrate on the human and the human experience, which Maggie’s does so well, we can really start to tell a different story.”

In designing the Royal Marsden Maggie’s centre, his team carried out interviews with users of other Maggie’s, asking them how they could use the architecture to lift the soul. One of the key observations was the need to let the senses free.

“When we enter a Maggie’s, we are bathed in the circadian rhythm,” said Rogers. “We’re watching shadows pass as the day passes. You can hear all the birds in the bird boxes of Alex’s centre, and these noises remind us that life is here. It’s simple things, such as thinking about the acoustics but keeping things open, having very absorbent materials, so you can hear the murmur of other conversations, which reflect so as not to be sterile, yet, at the same time, you can create privacy within that space.”

And another similar idea was to allow things made by the hand to be touchable. Explained Rogers: “If we’re talking about being made impotent by the hospital, the way to re-engage in life is to activate our sensuality and our senses – the sound, the sight, the warmth, the tactility, the taste of the space. This is what we try to create.”

“If you’re making decisions in a [typical hospital] corridor, you’re going to make really orthodox, bureaucratic decisions, because the building demands a kind of cognitive orthodoxy,” he remarked. “I think when the building changes and becomes more domestic in scale [as with Maggie’s], and the building appears to care for the patient, then the clinician can also care for the patient and the model shifts. So I’m no longer managing a factory. I’m in a house where someone ill has come in – and, like any guest, I’m their host.”

He continued: “The first time I walked into a Maggie’s centre, it was really shocking to me, because the needs of the institution were nowhere to be seen. It was the needs of the patients that were coming first.”

Furthermore, the traditional model of medicine – one of cause and effect – is hard to dismantle. But the truth is that context matters, said Dr Ranpura.

“If you’re unable to take time off work or you’re working night shifts all the time, your health outcomes are going to be worse,” he said. “So, with chronic stress, people who are living marginally, people who are living in poverty, they’re constantly stressed, so their health outcomes are going to be worse. . . We’ve grown up in a system where an intervention solves a disease. That’s still our model of how it works. We know the evidence is that’s not true but we’re slow to change.”

Reflecting on the lessons she has learned from the 25 years that Maggie’s has been designing cancer care centres, Dame Laura Lee noted, firstly, that many of the centres were not sized sufficiently “because we didn’t predict the growth in numbers of people living with cancer”. But another cultural shift in the intervening years has been the desire for self-management of care and the “real need for people to want to be involved in helping themselves”.

The importance of context

Picking up on the notion of context, highlighted by Dr Ranpura, she observed: “One of the criticisms of the functionality of hospital structures is they become linear referral pathways, whereas our buildings are about an integrated care delivery – financial worries, not sleeping well, stress relaxation management, seeing the psychologist. How can we shift our building types to allow for a more fluid integration and therefore more quickly solve the problems for the patient and family members?”

And coming back to the experience of Charles and Martin Curwain, she added: “Carers may feel invisible but that is because the clinicians are feeling uncared for themselves.”

Maggie’s centres are buildings that stimulate the senses and put patients, families and carers at the heart of a supportive environment – one that is receptive to the context of the complexity of individuals’ cancer care journeys. A shift from ‘factory-style’ treatment to a ‘homely’ care model, and from disempowerment and distress to re-engaging with life, the model should not only be seen as an “antidote” to the hospital machine – they can also be an inspiration to move from process to experience, “lifting the soul” for patients, carers and staff alike.

Organised by Architects for Health and SALUS Global Knowledge Exchange, the European Healthcare Design 2022 Congress, Awards & Exhibition will be held at the Royal College of Physicians, London, on 13–15 June, 2022.

Are you sure you want to delete this?